Alright, I’m not going to lie.  This month’s skill is probably my least favorite of all the general appliqué techniques: the deep “v” (or “valley” if you prefer).  It has the potential to be a tricky buggar and requires a bit of patience.  (A little chocolate/booze/swearing never seems out of line either.  Or maybe that’s just me.)  But it can totally be done!  And with a few tips, it’s very manageable.  So don’t worry, we are in this together.  Of course feel free to have the chocolate on stand-by, just in case.

The shape for this appliqué was taken from the long eye-pins that are used to suspend the opal pendant (look back at the January post to see the inspiration piece).  It has a wonderful round loop at the end that makes a perfect little “v” shape on the inside curve.  The loop itself is also a tighter curve than we’ve tackled before, so we’ll talk about some tricks to help manage that in addition to the technique for stitching the “v”.

Begin by printing out a copy of the template, making sure the scaling on your printer is turned off.  The template should be around 8 ¾” long.

Whether you are making the wall or lap sized quilt, this month’s block is the same for both.

Align the appliqué so the straight edge is flush with the bottom of the background square and the right stitching line is 3 ¼” from the right side of the block. 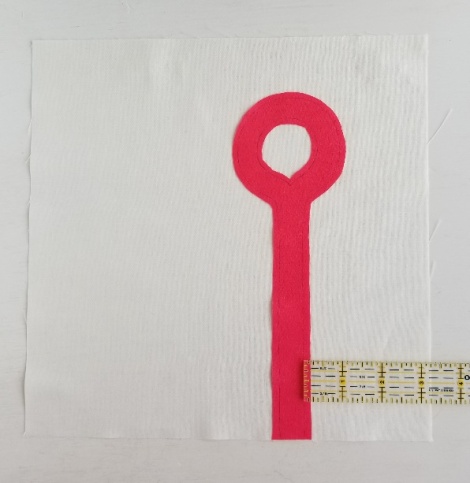 Begin stitching at the lower right of the appliqué. Stitch up the straight side.  When you get to the small concave curve at the base of the loop you will begin to feel the seam allowance resisting and not wanting to turn under easily.  At this point, it helps to clip into the seam allowance just slightly to release that tension.

Tip:  Don’t cut all the way to the drawn stitching line.  Clip to within 2 or 3 threads of it.  I’ve used two cuts here, about 1/8” apart and it worked beautifully.  If you still find it won’t lay nicely after you’ve clipped it, try making your cuts the tiniest bit deeper- just by another thread or two.

Continue stitching up and around the convex curve of the loop portion.

Tip:  If your curve has bumps or points and isn’t completely smooth, the culprit is likely one of two things: A) The seam allowance is too wide and there is too much fabric to ease under the piece easily. Or B) You are trying to cover too much ground with each stitch.  Turn under only enough seam allowance for one stitch at a time.  Remember that the more pronounced the curve, the closer your stitches should be to one another. Try for 1/8”.

When you get around the loop and to the concave curve leading back to the straight portion, clip it like we did above and continue stitching to the end of the appliqué.

Get a new piece of thread and begin stitching about ¾” from the “v” on the right side of the inner curve.

Tip: Even if there’s enough thread left from stitching the outside edge of the appliqué, it’s worth starting a new one here.  As you sew, the thread gets worn and picks up twist, and becomes more likely to knot or break with each additional stitch.  The WORST feeling is stitching the “v” perfectly, only to have the thread break just as you start up the opposite side.  Trust me on this.  There’s no need to terrify your pet/toddler/spouse with a sudden burst of expletives.  Just start with a new thread.

Begin stitching your way toward the “v”.  The seam allowance is going to resist turning under within a few stitches, so you need to stop and clip directly into the “v”.  You’ll need to cut straight into the point, not at an angle.  Cut right up to the stitching line.

Tip: As a general rule, it’s always good to avoid clipping into a “v” or very deep curve until the last possible moment.  You want to keep the fabric intact as long as you can while you’re handling it so it frays as little as possible.

As you make the next few stitches, the seam allowance will get narrower and narrower.  Don’t worry, just keep sewing.  Your stitches should be very close together at this point- 1/16” or so.

Tip: You may find it easier at this point to switch to a stab-stitch (where the needle goes from front to back and you pull the entire thread to the back before putting it through to the front again) rather than the all-in-one-motion type of stitch typically used for appliqué.  The stab-stitch doesn’t seem to dislodge those threads that you’ve so carefully tucked under quite as much.

When you get to the deepest point of the “v”, take an extra anchor stitch right at the point.  It’s fine if it shows.  You want to stabilize that part of the fabric as much as possible and since we’ve cut all the threads leading up to it, it can use a bit of extra support.

Now, starting about 1/4” or so to the left of the “v”, use the length of your needle to push the seam allowance under and back down toward the “v” (working from left to right).  Push under more than just the width of the seam allowance and then ease it back out to the stitching line as you stitch from right to left.

Tip:  Don’t be afraid to pull the seam allowance back out and turn it under again if you don’t like how it lays the first time.  It usually takes me a couple passes to get it where I am happy with it.

Keep stitching your way up the left side of the “v” and start working around the rest of the inner curve.  You will need to clip the seam allowance as you go, to within a couple threads of the stitching line and about 3/16” apart.

Continue stitching all the way around the inner curve and your finished Loop should look something like this:

It will go here in the final quilt layout (wall, then lap size):

As always, if you have any questions about anything here or would like more information, email me at thebespokeoutlaw@gmail.com or come find me on Instagram at @bespokeoutlaw.