The latest giving quilt finish had a bit of an unusual start, in that its blocks weren’t even made by members of our guild!

I went to London in the winter, 2015, and attended the London MQG  meeting, which is held in a pub!  During the meeting we discussed the possibility of doing a swap.  We agreed to keep it simple given the cost of shipping.  After returning home, I communicated with two of their members who were in charge of those activities, and they suggested that we swap 12″ blocks in red and white.  We had about 30 participants from the Seattle MQG.  London had a smaller guild, so many of their members provided two blocks in order to match our 30.   I also discovered that they were running the same swap with the Houston MQG.  You can see blocks from both swaps at #londonseattleswap and #londonhoustonswap.

Here are the blocks Seattle made for London…. 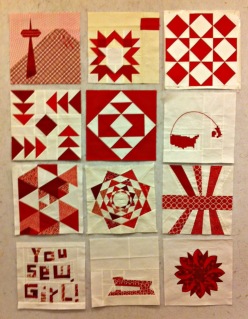 and the blocks received back!

Once the blocks had been swapped, Deb Ferguson and Liz Litzler worked most of them into a quilt top, and Deb made a back, which included a few of the blocks as well.

Matt Macomber quilted it with a fun loopy pattern, with a few extra details here and there…. 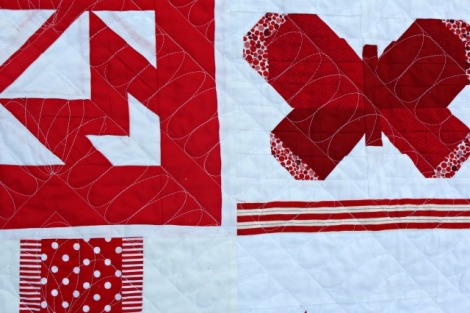 and then Deb finished by binding it. This quilt will be donated to Nurse-Family Partnership.

2 responses to “2016 Giving Committee- Across the Pond”